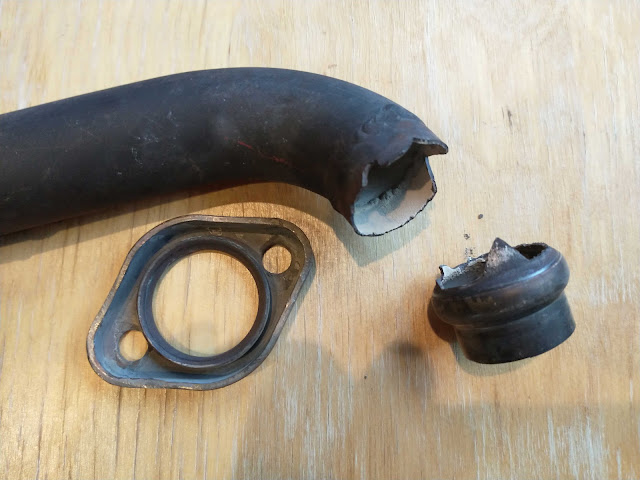 When we started flying four decades ago, we asked friend Jack, a very experienced pilot, aircraft mechanic, and computer science guru, "What are the odds of an engine failure in flight?" He responded, "About once in your lifetime." We just had that rare event and hope it is the only one for the remainder of our flying career. Here is the story. The Flight Departing at 6 am from the Aero Country airport north of Dallas, TX, a strong tailwind pushes us north to the Lee’s Summit airport near Kansas City, MO in four hours. The new carburetors that we installed a few weeks ago on the Rotax 912 engine of our Zenith 601 HDS have cut fuel consumption. We burn just 12.2 gal in those four hours. We refuel with 91 octane Mogas, help another pilot figure out the self service refueling system, and take off. It’s less than three hours to our final destination, the Boone Municipal airport north of Des Moines, IA. Perfect weather, a strong tailwind, a purring engine. What could pos
2 comments
Read more 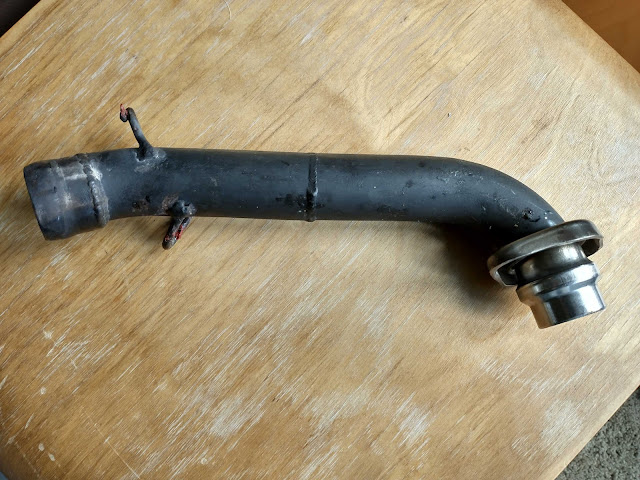 You discover that an exhaust pipe of your engine has failed. For example, the pipe has broken apart, going from something like this . . . . . . to these two pieces.  Failed exhaust pipe This isn't difficult to fix. You get a replacement for the broken-off segment, cut the pipe appropriately, and weld the two pieces together. For the fitting and initially tack-welding, you install the two pieces on the airplane, secure them in place, and tack-weld them together. You remove the resulting single piece, carefully weld what so far has just been tacked together, and get a finished piece that is guaranteed to fit. But what do you do if the airplane is at a remote airport and you must create the repaired pipe off-site? We recently had that situation. Here is our six-step solution. Step 1 You first tack-weld together the two existing pieces so that a one-piece pipe with correct shape results. Of course, this pipe cannot be used in the plane. Step 2 Using a sheet of high-density styrofoam th
Post a Comment
Read more

Too Windy for Flying 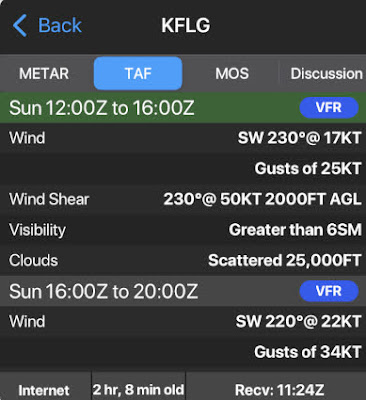 The plan was perfect. Fly to Albuquerque, NM and help daughter Ingrid around her house for a day. Then fly to Flagstaff, AZ and drive with a rental car to the Grand Canyon. Camp and hike for a few days, then do everything in reverse to get back to Dallas. The flight to Albuquerque is uneventful except for some turbulence and a strong headwind as we cross the mountains east of Albuquerque and fly toward the Double Eagle airport, our destination. The next day starts with a surprise. The TAF (Terminal Area Forecast) for Flagstaff predicts strong and turbulent winds for the Flagstaff airport, with winds 22 kts gusting to 34 kts.  See below the forecast for the period 16:00Z to 20:00Z, which corresponds to 10 am to 14:00 pm MDT (Mountain Daylight Time). The Z means Zulu. It refers to Greenwich time. Terminal Area Forecast for Flagstaff (KFLG) For the same period, the Garmin Pilot predicts headwinds for the route Albuquerque to Flagstaff at 30 kts. Some headwind had been forecast when we pla
Post a Comment
Read more

How to Fix Rotax 912 Carburetor Leak 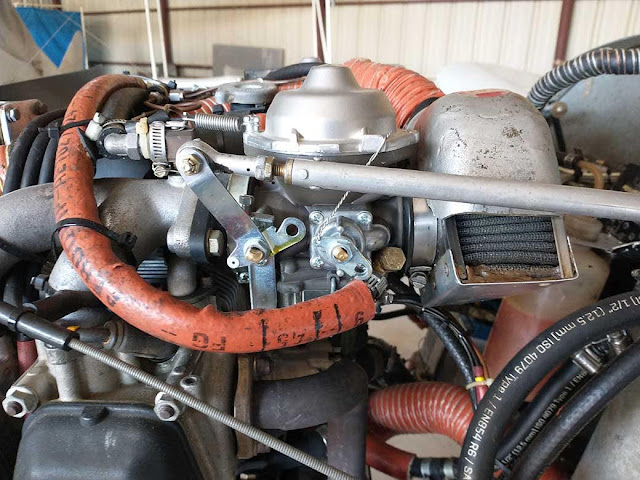 New 2022 carburetors for 1994 Rotax 912 UL For more than 27 years, the Rotax 912 carburetors of our plane delivered trouble-free performance.  That changed suddenly. It started innocuously enough: a small drop of fuel out of the cowl seen during a preflight check in Albuquerque, NM. Guess 1: Expanding fuel in the center tank Probably overfilled the center tank during the recent fueling. The fuel has expanded, hence the drop of gas on the floor. Let’s ignore this and fly back to Dallas. Back home, next Sunday. Another drop of fuel on the floor after moving the plane to the front of the hangar. The expanding-fuel explanation is wrong. We remove the top of the cowl. The underside of the air filter of the right carburetor is wet with gas. Guess 2: The needle valve in the float bowl no longer closes properly. No wonder. The needle is more than 25 years old. Easy fix: We order two needles for the two carburetors. When the new needles arrive, we open up the carburetors, pull out the old needl
1 comment
Read more 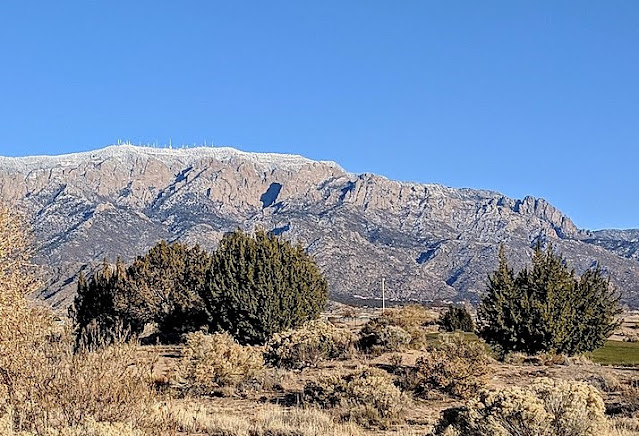 Sandia Mountains viewed from the west. Credit: Reduced version of photo by Dicklyon - Own work, CC BY-SA 4.0 If Murphy had been knowledgeable about aviation, he would have strengthened his law and said: "It will go wrong." All of the bad events described below happened during just one trip from Dallas to Flagstaff, AZ and back. Overpowering Downdraft We are en route from Dallas to Albuquerque, NM. After a refueling stop in Plainview in the Texas panhandle, we encounter a strong headwind. We try to minimize the effect by flying 1,000 ft AGL (above ground level).  The wind becomes stronger as we approach the Sandia Mountains near Albuquerque. See the above photo, which shows the mountains from the west.  We need to climb at least to 2,000 ft AGL to avoid mountain-induced turbulence. Due to the headwind, we make little forward progress, while the headwind cascading down the east side of the mountain pushes us down. We have never seen such a strong combined effect during our nume
Post a Comment
Read more 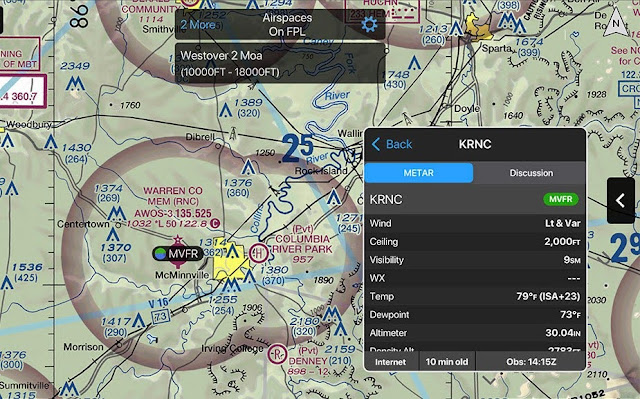 Magenta area with MVFR airport West Texas loves low ceilings in the morning, an amazing fact when you consider that this is desert country. A notable exception is the Pecos airport, which evidently has a secret contract with the weather gods for unlimited ceiling and visibility year round. We plan accordingly. When we go west from Dallas, we carefully monitor the ceiling of our preferred refueling stop, the uncontrolled airport Andrews in the Midland/Odessa area. Andrews almost always has ceilings of less than 500 ft in the morning. If the ceiling lifts to at least 1,000 ft by the time we get there, we land and refuel. If that fails, we detour to Pecos, which invariably is VFR. Andrews is surrounded by a magenta boundary. It means that within that area one may fly up to 700 ft AGL while staying clear of clouds, provided visibility is at least one mile.  So why wouldn't we land at Andrews if the ceiling was at least 700 ft, instead of demanding at least 1,000 ft? We could simply f
Post a Comment
Read more

The Invisible Threat of Wind Turbines 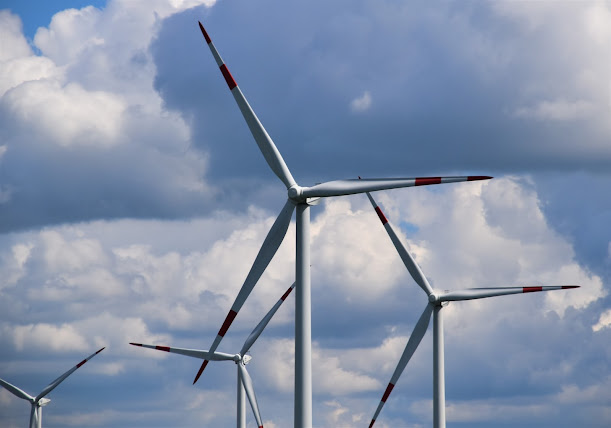 Field of wind turbines. Photo by Waldemar Brandt on Unsplash West Texas has huge swaths of land covered with ever-larger wind turbines.  These turbines are a significant threat to aviation, as has been established in several studies of turbulence and visibility. The threat will grow as turbines become ever larger. The latest development is a turbine by General Electric with a 850 ft (260 m) tall tower and 350 ft (107 m) long blades that will likely show up in Texas some time in the future.  There are two problems for pilots: The blades are difficult to see from the air, and they produce significant turbulence downstream. While the turbulence of single turbines has been studied in detail, little is known about the effect of an entire field of turbines. Here is a demonstration that fields of turbines can create powerful turbulence. Below is a screen shot of a Garmin Pilot map taken on May 29, 2021 when we were planning a flight from Dallas to Albuquerque, NM. It shows a field of turbine
1 comment
Read more 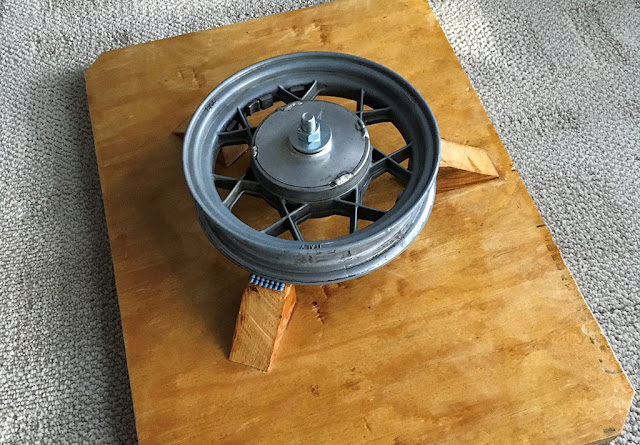 Fixture with mounted rim Several Zenith aircraft have wheels with one-piece rims. Changing the tire of such a wheel is difficult, since t here is no easy way to clamp down the rim.  We have that case for the 8 in. wheels of our Zenith 601HDS, where the rim has delicate cast spokes.  This post describes a fixture that makes the task easy. It holds the wheel in place while we remove  or install the tire with two spoons. Fixture for holding wheel Here are the steps for making the fixture. Platform Use 3/4 in. plywood. Make the piece large enough  so that you can hold it down with your feet or knees. Three Support Blocks Cut three triangular support blocks shown in the above photo from a short 2x4 piece. Attach  them to the platform from below with one drywall screw each. Glue a patch of rubber shelving material on top of each support block. The soft material assures that the blocks do not scratch the paint of the rim. Center Bolt and Spacers The center bolt has th
Post a Comment
Read more
More posts

Klaus Truemper
Klaus Truemper hails from Cologne, Germany but has lived in the US since 1965. He has flown more than 2400 hours over the last 40 years. This includes 1900 hours flying his experimental Zenith 601HDS plane. He constructed it 25 years ago with expert builder Mel Asberry.

Klaus is Professor Emeritus of Computer Science at the University of Texas at Dallas. His research focuses on problems in Mathematics and Artificial Intelligence, and now includes questions of philosophy.

Klaus's most recent books:
The Construction of Mathematics: The Human Mind's Greatest Achievement

Read more about his books and software and DIY projects.